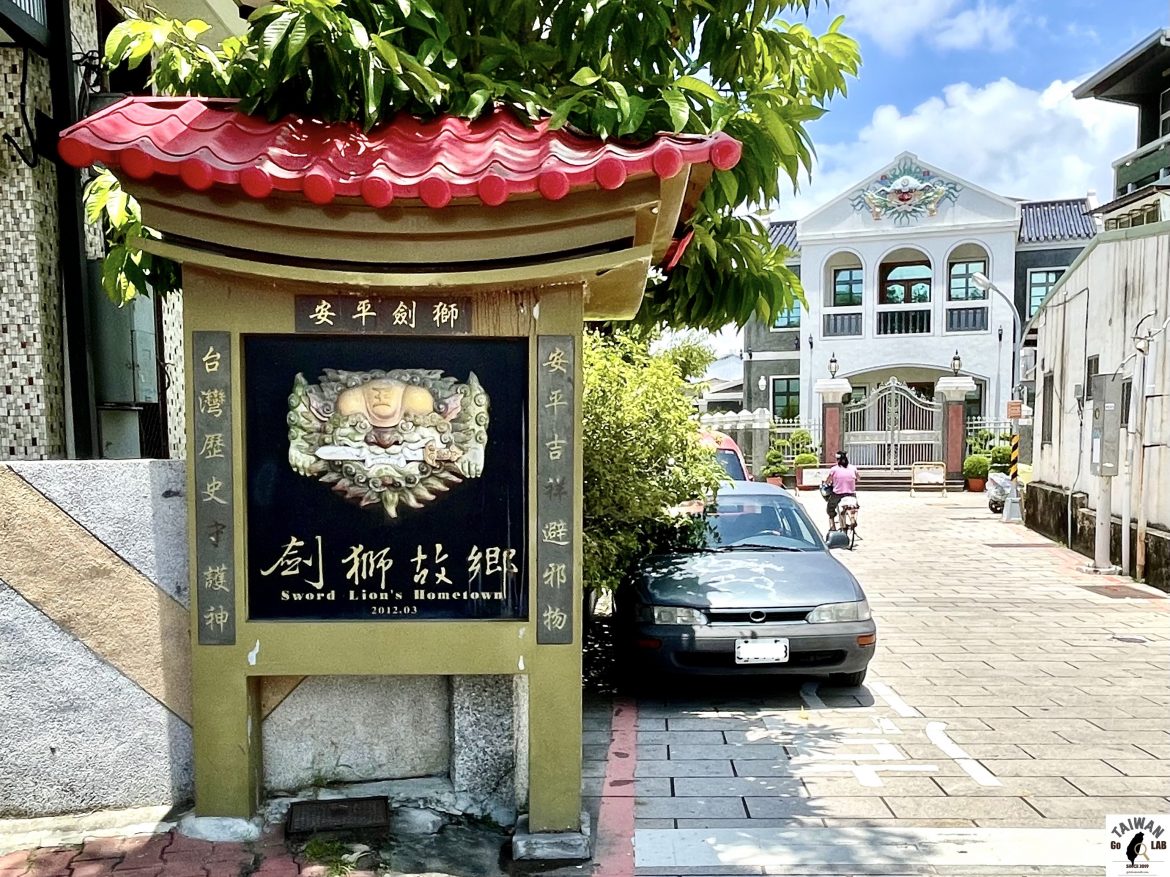 You may have seen many lions in temples in Taiwan, but do you know that Anping, a district in Tainan City, has its own Sword Lion Culture? These Sword Lions hidden in the alleys have accompanied the Anping residents for more than hundreds of years. It’s not only an important culture in Anping, but also a historical relics that people are committed to preserving recent years.

The Origin of Sword Lion

Although there are four to five different versions of the origin of the Sword Lion, the following version related to the army in the Ming and Zheng dynasties is the most recognized. This story needs to trace back to the time that the Koxinga’s (Zheng Cheng-gong) army forced the Dutch to leave Taiwan. At that time, the Zheng’s soldiers used to hang their shields and swords on the door after fighting and training. Their shields were very special, with a lion face decorated on it. Therefore, if you look at the shield and the sword together from a distance, it would look like a lion which is biting a sword. And this is what we later called the Sword Lion.

At that time the public security in Anping was very bad. Since Anping was located very near to the ocean, many thieves and pirates often came ashore to rob. However, when they saw a house with a sword and a lion shield on the door, they thought there was soldiers living inside. Thus, they did not dare to rob that house. Over time, other residents also imitated the soldiers to hang a Sword Lion on the door to prevent the thieves. Hundreds of years have passed, although the public security is stable and it is rare to see thief nowadays, people still believe that Sword Lions could protect them from dangers and bad things. Not to mention that lions are the kings of the beasts, this image has even strengthened people’s belief in the Sword Lion.

The Symbols of Sword Lion

When you’re facing the Sword Lion, if the sword handle is on the right hand side, it means to pray for blessings. In contrast, if the handle is on the left, it symbolizes to ward off evil spirits. If you see a sword lion with two crossed swords, it’s the most powerful one, which represents to fight and battle.

The first type of sword lion with handle on the right was normally be put on the residents’ house. This is because fishing was the most common business in Anping before. While facing the unpredictable sea, people would hope to eliminate disasters and increase their blessings. That’s why they hang blessing sword lion on their door.

Different from the blessings sword lions, the evolution of ward-off sword lion with handle on the left is related to the many winding lanes and narrow alleys in Anping. It’s considered unlucky if the house is facing a road. Therefore, residents usually place a sword lion facing that road, in order to ward off the evil spirits or the bad luck.

Another interesting thing to share is that sword lions had become a way to identify the owner of the house in an era when there was no house number plate. The sword lions were made by wood, clay, stone, oyster shells, and pottery. People made their unique sword lions according to their family’s own preference. All sword lions had different facial expressions, none of them were identical.

Moreover, the color of sword lion represents the family status in the community as well. From the highest to the lowest status, they are purple, red, cyan-blue, and black. Although many sword lion’s color has faded, it becomes difficult to distinguish the status by color now. People in the old era could really distinguish who’s living in the house with these two characteristics.

Nowadays, the metal door plate has replaced the sword lion and becomes the official one now. However, I still accidentally found that some households create their own door plates with the element of sword lion inside. Even though it is different from the original Sword Lion people used to hang on the door, it represents their efforts in culture preservation.

In fact, people’s cultural protection awareness were insufficient before. Lots of old houses with sword lion on them have been demolished to build the new one, so the number of sword lion is rapidly decreasing. Fortunately, the government saw this problem before the sword lion culture completely disappeared. They even set up the Sword Lion Square to preserve the sword lion culture.

If you plan to travel to Anping, don’t just go to Fort Zeelandia and the commercial old streets. You should try to go into the mysterious lanes and look for the magic sword lions hidden inside!

Hi, I'm a Taiwanese girl who loves Taiwan this small island so much, and hope to introduce this formosa to everyone around the world. That's why I created this website and try to share everything about Taiwan via internet. Hope you enjoy all the articles here in my space xoxo

Taiwan GIANT bike rental instruction, all you need to know before cycling around Taiwan

[Taichung 花鳥川] Everyone is losing their minds over...

@2019 - All Right Reserved. Designed and Developed by PenciDesign