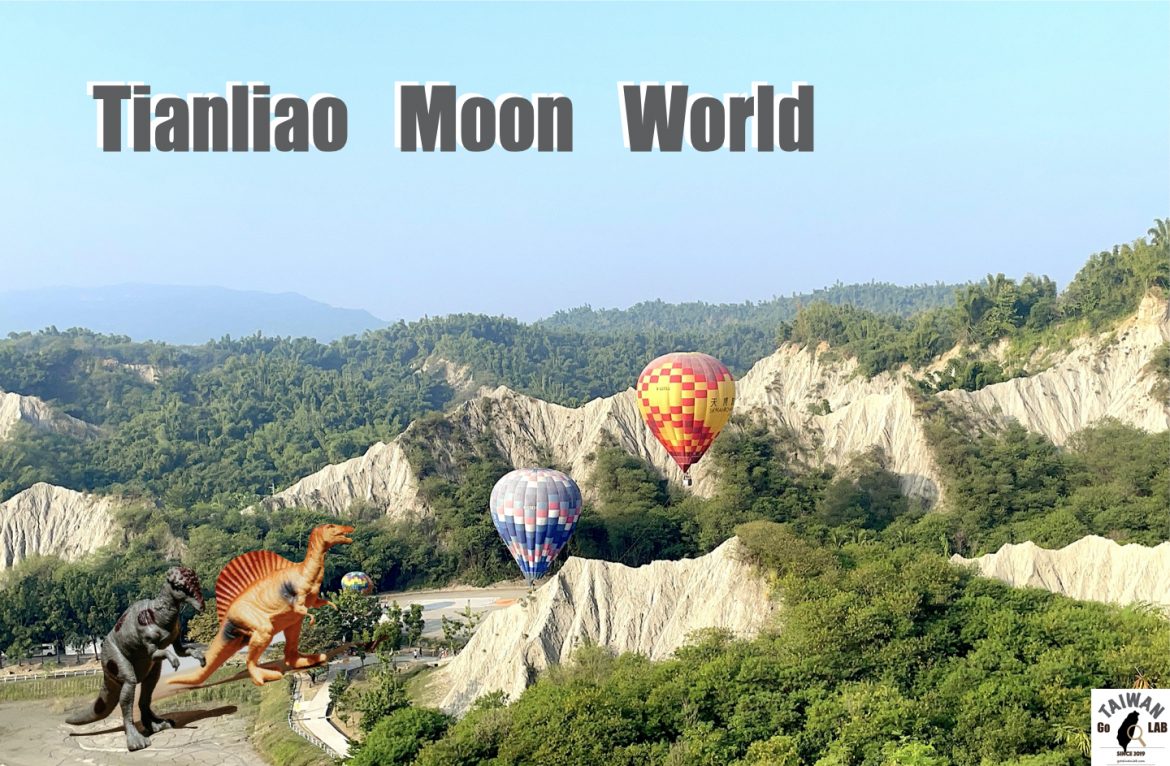 Tianliao Moon World is famous for its barren land. Since plants are difficult to grow there, the landscape looks like the surface of moon. That’s why people called it the Moon World. However, comparing to the Moon World, I think it looks more like the scene in Jurassic Park. Feeling that dinosaurs will come out at any time. Recently, there is even a hot air balloon event held in Tianliao Moon World, which seems to be somewhat similar to Turkish Cappadoica. Follow Go Taiwan Lab‘s steps, let us take you to the moon!

Do you know that you can get a 15% discount when buying high-speed rail tickets on KLOOK? It’s not only super convenient, you can also accumulate points for KLOOK member and 高鐵TGO member. (There is a restriction that you cannot enjoy the discount if you only purchase the ticket. It must be combined with an additional purchase item, such as car rental, amusement park tickets, and so on.) Why not book everything you need for a trip on KLOOK? It will be much cheaper than ordering separately!!! >>>> BOOK HERE

Google Maps search “Moon World Landscape Park”, there is a parking lot right in front of the tourist center.

According to Taiwan Tourism Bureau, the queer terrain of Tianliao Moon World is officially called “badlands” in geography an adverse landscape caused by the strong erosion of rain and streams over the years due to “rejuvenation” of the earth’s crust. Many people should have seen the badlands on both sides when driving through the Tianliao section of the highway. However, because of the lack of management, Tianliao Moon World was just a place that people knew about but did not want to visit. It was not until the government set up a tourist center and trails recently that it gradually became a popular attraction.

You will see a parking lot right in front of this tourist center. After parking the car, it’s a good choice to walk around the building. There are a few venders selling local fruits, vegetables, ice cream, and tea eggs. A farmer’s association supermarket is on the second floor. Don’t forget to buy some souvenirs when you return.

If you understand Chinese and are interested in a guided tour, you can also sign up for a tour at the information center. The most important is that remember to go to the toilet before starting your hiking!

As you can see on the map above, Tianliao Moon World’s trails are connected. You can choose which way you want to take first. The route starting from Jade Pool is the most popular and the one we recommend today.

When you see these goat trees, it means you are on the right way to the Jade Pool. Jade Pool is the first and the most famous photo taking point in Tianliao Moon World. Here you can take a panoramic photo of the Moon World, including the barren mountains and the vast lake. If you are lucky enough, you can even take a mirror reflection of the mountains in the lake in good weather.

After taking a good photo at the starting point, you need to decide which road around the Jade Pool you are going to walk. The left road in the photo below has many trees on both sides of the road. You can walk in the shadow, it is less hot. The other road on the right side is next to the mountain, which is better to take photos.

There are several explanation boards along the way. If you are interested, you can stop and have a look.

There is an open space at the end of the Jade Pool. When you face it, you need to take the road on the right hand side. Then you are walking on the Badland Trail.

You will soon see this small rest area (picture above) on your right. Don’t forget to take an insta-worthy photo here!

Keep walking, you have to climb up this steep slope.

After climbing up, you will see many banana trees. Just keep going straight. You are almost there!

Unfortunately, the most amazing trail is closed now. There are rumors that it will not open in a short time. How come???

The Moon Pool is just on the top of this 156 steps of the staircase. You should not give up here.

Here you are, what a chill atmosphere! You can even take photos overlooking the Moon World from a corner of the moon pool.

If you choose the same route as me, after Moon Pool is on the returning way. Just keep going downhill. However, for others who choose the opposite route, it is just the start of their journey. They have to climb all the way up to the Moon Pool, that is why they called it Trail For Moon Landing.

My personal advice is that if you hate climbing stairs, take the Trail For Moon Landing first. If you would like to take photos before you sweat, then follow my route.

On the way back to the tourist center, you will pass by Crescent Observation Deck and Moon Park. You can also take some photos here before finishing today’s hiking.

Finally, don’t forget to find a highly-rated free-range chicken restaurant nearby to have a meal to reward yourself for the hard work today!

You can search for a restaurant on TripAdvisor, a well-known international travel review site that provides travel-related information. If you like our article, you can also search for a hotel nearby. We will gain a little rebate from your search. You don’t have to book an accommodation, simply look for a hotel.

Hi, I'm a Taiwanese girl who loves Taiwan this small island so much, and hope to introduce this formosa to everyone around the world. That's why I created this website and try to share everything about Taiwan via internet. Hope you enjoy all the articles here in my space xoxo

7 useful apps you need while living in Taiwan (Taipei)

[Taichung 花鳥川] Everyone is losing their minds over...

@2019 - All Right Reserved. Designed and Developed by PenciDesign